On a recent Thursday evening at the Forum Theatre in downtown Silver Spring I had the exciting privilege of seeing a splendid staging of Caryl Churchill's play, Love and Information.  Directed by Michael Dove and starring 14 versatile actors, this 57-scene play kept moving from one arresting moment to another.  Many of the scenes were poetic and several were substantially mathematical.  For example:

Posted by JoAnne Growney at 8:05 AM No comments:

Moving from STEM to STEAM in Australia

"Poets," said Australian writer and teacher Erica Jolly, "find their themes in what matters to them."  This quote is taken from Jennifer Strauss's introduction to Jolly's poetry collection, Making a Stand  (Wakefield Press, 2015).  Erica Jolly is a retired teacher of history and English in southern Australia and works tirelessly toward ending the segregation between STEM disciplines and the arts and humanities.  In the lines below (taken from Making a Stand), Jolly is responding to words from former Chief Scientist Professor Ian Chubb who has said, speaking of mathematics, that he wants "all of us in the same tent."

Erica Jolly:   If he does, we must remove segregation of students
into supposedly separate cultures of science and mathematics versus
the arts and humanities as well as the unwillingness for STEM
to make interdisciplinary connections.

Don't I as one of those deemed
inappropriate for that elite
have the right to access
their language?

to algebra, that Arabic word,
giving me letters in place
of apples or oranges to
solve problems

Read more »
Posted by JoAnne Growney at 1:16 PM No comments:

The Journal of Humanistic Mathematics has issued a call for Mathematical Haiku -- follow this link for the guidelines and instructions on how to submit your work.  Since I did not, at first, understand that the submission request is for only three Haiku, I gathered more.  Here are several of my leftovers -- involving multi-syllabic mathematical terms --  that I was not able to include in my submission:

A couple of weeks ago, Irish poet-physicist Iggy McGovern read here in the DC area and introduced readers to his new poetry collection The Eyes of Isaac Newton (Dedalus Press, 2017).  McGovern's poems involve a wide variety of scientific topics:  vision and color, genetics, quantum theory, and so on -- peopled with scientists and poets -- an amazing variety of topics and verses, scientifically accurate yet accessible to a non-scientist reader.
McGovern's poems sometimes turn to humor and below I feature three examples of his clerihew.

From Wikpedia (edited):   A clerihew is a whimsical, four-line biographical poem  --
the first line gives the name of the poem's subject,  usually a famous person who at whom fun will be poked.
The rhyme scheme is AABB, and the rhymes are often forced. The line length and metre are irregular.

Because none of McGovern's clerihew feature women, I insert one of my own,
about unheralded 20th century codebreaker Elizabeth Smith,
subject of The Woman Who Smashed Codes  by Jason Fagone (Harper Collins, 2017).

Elizabeth Smith,
poet, technologist,
code breaker, Nazi exposer--
and, alas, no one knows her.
And, from Iggy McGovern:

Albert Einstein
liked to opine:
"It's not very nice
Of God to play dice."

Read more »
Posted by JoAnne Growney at 10:20 AM No comments:

Mathematician Sarah Glaz has recently published a lovely and varied collection of math-linked poetry -- choosing her title, "Ode to Numbers," to echo Pablo Neruda. That Neruda poem is one that Glaz and I have long-loved -- it is included in our anthology, Strange Attractors:  Poems of Love and Mathematics (AK Peters/CRC Press, 2008).
In recent days I have much enjoyed reading -- and rereading -- the variety of poems included in Glaz's new collection Ode to Numbers (Antrim House, 2017).  The publisher's author-page includes several sample poems and one of them, "A Woman in Love," offers this appropriate self-description:

I see a streak of mathematics
in almost everything.

Glaz's poetry takes a reader to childhood days in Romania, to mathematics conferences, to a variety of topics in the history of mathematics, and to the inner workings of a beautifully creative mathematical mind.  One of my personal favorites among poetic forms is the pantoum -- I love the way that permuted repetition of phrases offers surprising new meanings -- and Glaz's collection offers several of these.  Earlier in this blog (at this link) I posted "A Pantoum for the Power of Theorems" and below, with permission, I offer "Mathematical Modeling."

Perhaps the way to link this couplet by Richard Wilbur (1921-2017) to mathematics is by referring to the notion of subset.   Wilbur is a favorite poet of mine, and he recently has died.

“Because he swings so neatly through the trees”   by Richard Wilbur

Because he swings so neatly through the trees,
An ape feels natural in the word trapeze.

I found these lines at PoetryFoundation.org and they are included in Wilbur's collection of illustrated wordplay, The Pig in the Spigot (Voyager Books, 2004).  Wilbur has been mentioned previously in this blog -- to explore, you may use the SEARCH box in the right column or follow this link.

Posted by JoAnne Growney at 9:56 AM No comments:

The double dactyl is, like the limerick, a fixed verse form -- and one that is often humorous. From Wikipedia's, we have this initial requirement:  "There must be two stanzas, each comprising three lines of dactylic dimeter ( ¯ ˘ ˘ ¯ ˘ ˘ ) followed by a line consisting of just a choriamb ( ¯ ˘ ˘ ¯ ) . . ."   As the samples below illustrate, a double dactyl involves both nonsense and multi-syllabic words -- a non-trivial challenge; visit Wikipedia to learn more.
The verses below are by Arthur Seiken, Emeritus Professor at Union College and I found them (with the help of editor Marjorie Senechal) in a 1995 issue of  The Mathematical Intelligencer (Vol 17, No 2, p 11). 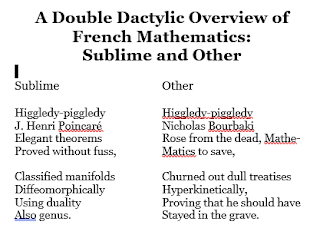 If you want to see more of this poetic form, here are links to follow:  "Mathematical Double Dactyls" by Tristan Miller from the July 2015 issue of the Journal of Humanistic Mathematics and the Higgeldy Piggeldy verse collection of Robin Pemantle.  And, again, here is a Wikipedia link that supplies formal details of these verses.

Posted by JoAnne Growney at 11:46 AM No comments: