Looking back to an old poem -- "Expectations"

Years ago I wrote this poem -- recently I have rediscovered it and, once again, pondered the role of time in my life.  Here, from the 1980's is "Expectations" -- a poem that appears in my collection, Intersections (Kadet Press, 1993).

Don't let mathematics
teach you to expect two
to be more than one.

It's sad but true that two
can get too near,
can interfere,
can reduce each other
to less than one,
to less than half.

Read more »
Posted by JoAnne Growney at 11:09 AM No comments:

Today I share a poem by poet A. Van Jordan that takes math-science terminology and mixes it into personal situations -- and offers varied ideas to consider.  Born in Ohio, Van Jordan became interested in poetry while studying for a masters degree at Howard University and attending readings in Washington, DC.

INSERT SHOT: Einstein’s notebook 1905—DAY 1: a theory that is based on two postulates (a) that the speed of light in all inertial frames is constant, independent of the source or observer. As in, the speed of light emitted from the truth is the same as that of a lie coming from the lamp of a face aglow with trust, and (b) the laws of physics are not changed in all inertial systems, which leads to the equivalence of mass and energy and of change in mass, dimension, and time; with increased velocity, space is compressed in the direction of the motion and time slows down. As when I look at Mileva, it’s as if I’ve been in a space ship traveling as close to the speed of light as possible, and when I return, years later, I’m younger than when I began the journey, but she’s grown older, less patient. Even a small amount of mass can be converted into enormous amounts of energy: I’ll whisper her name in her ear, and the blood flows like a mallet running across vibes. But another woman shoots me a flirting glance, and what was inseparable is now cleaved in two.

The poem above was found here at poets.org along with other samples of Van Jordan's work.  His poem "Quantum Lyrics" was included in this blog (at this link) back in February 2019.

Posted by JoAnne Growney at 11:19 AM No comments:

When working with students in poetry workshops I often ask them to write to satisfy a constraint -- perhaps a Fib or a square poem -- in order to help them focus their thoughts.  This morning -- in the middle of a heat wave -- I focused my thoughts squarely on my growing concerns about climate.

Steamy weather.  I count
the degrees.  I count on
air conditioning.  But
my cooling system adds
to global warming.  What
is the right thing to do?


Here is a link to previous postings in this blog that offer climate concerns.

Posted by JoAnne Growney at 10:13 AM No comments:

Growing up on a farm in Western Pennsylvania, one of my heroes was Amelia Earhart (1897-1937) -- a brave and talented female who died too soon.  Fearlessly Earhart broke barriers for all women and my admiration for her led to the following poem (which is a tiny bit mathy -- since it contains several numbers).  The 125th anniversary of Earhart's birth occurs soon -- on July 24, 2022 -- and lots of years ago after reading about her life I wrote these lines to celebrate my appreciation for this remarkable woman.

Set for collision
with a horse and cart,
that girl put down her head
and slid between the horse's legs.

Read more »
Posted by JoAnne Growney at 3:40 PM No comments:

Poems with multiple choices of what to read . . .

When you pick up something to read -- a newspaper article, instructions for a new appliance, or a poem, or whatever  -- in what order do you read it?  For many of us, reading is not a beginning-to-end process but a jumping around in which we survey the scope of what's to be read, look for internal highlights, focus on particular terms, etc.  A fascinating exploration of multiple ways of reading a particular poem is a treasure I have found in a blog that I visit often, Poetry and Mathematics by Marian Christie.

Born in Zimbabwe and now living in the UK, mathy poet Marian Christie offers a delightful and informative blog that thoughtfully explores various ways in which the arts of mathematics and poetry are linked.  In this January, 2022 blog posting Christie examines what she calls a "multiple choice" poem -- that is a poem that offers multiple ways of reading what the page presents. The poem she considers is one written in 1597 by Henry Lok in honor of Elizabeth I; below I offer a diagram of that poem, copied from Christie's blog.

Read more »
Posted by JoAnne Growney at 1:09 PM No comments:

The threats of the coronavirus seem less now, but are not gone.  And, as I go through files, I have found these Fibs -- expressing concerns from worried days. 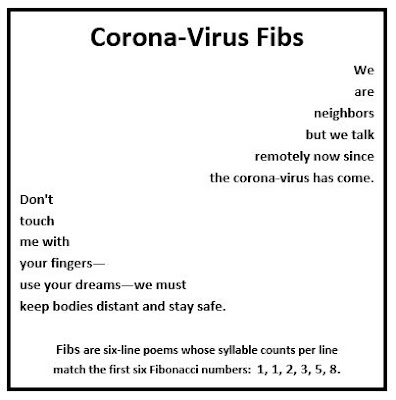 Lots of previous blog postings with Fibs can be found at this link.
Posted by JoAnne Growney at 1:40 PM No comments:

Poetry and the Fields Medal

It has been exciting to learn that a woman -- Maryna Viazovska of Ukraine -- has won a Fields Medal (often called "the Nobel prize of mathematics"); Viazovska is one of four persons who have been recognized (announced on June 5) for her outstanding contributions to mathematics.  Fields medals were first awarded in 1936 and are awarded every four years to up to four mathematicians under the age of forty.  The only other female mathematician who has received this award was Maryam Mirzakhani in 2014.

Also of much interest to me concerning this year's Fields Medal winners is that one of them, June Huh, was in high school interested in becoming a poet -- and dropped out of school to pursue that goal.  Later, however, in his university years, Huh began to see his future in mathematics.

Read more »
Posted by JoAnne Growney at 10:08 AM No comments:

The title of this blog post, "Still Life with Mathematics" is also the title of a mixed media artwork by Pacific Lutheran University math professor Jessica Sklar and displayed in Mathematical Art Galleries for the 2022 Joint Mathematics Meetings.  Included in the art (which Sklar describes as a tribute to her dissertation advisor and to mathematics) is Sklar's poem, "Disciple" -- first published here in the Journal of Humanistic Mathematics in 2017 and offered below;  Sklar describes it as "a love poem for mathematics."

And when they ask why I love you,
I divulge: in your universe,
normality is special, naturality
is contrived, fields can be infinite
and singularities are as commonplace
as odd primes.

Read more »
Posted by JoAnne Growney at 10:18 AM No comments: