This thoughtful poem by versatile poet Mary Peelen appeared in the Winter, 2016 issue of The Massachusetts Review.

The x could have been
anything at all,

the sound of wind chimes,
a gong, a choir, a cantor,

a mermaid, a schoolmarm,
cathedral bells.

Read more »
Posted by JoAnne Growney at 9:38 AM No comments:

One of my granddaughters has been working with Venn diagrams in her middle school math class.  And my thoughts turned to this poem -- back in 2018, Twitter poet Brian Bilston (@brian_bilston) celebrated the August 4 birthday of the diagram's inventor, logician John Venn (1834-1923), with this clever poem in a Venn diagram. 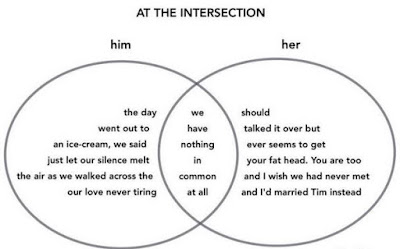 Lots more of Brian's poetry adventures can be found here at his website.

Posted by JoAnne Growney at 9:58 AM No comments:

One of the classics written about mathematics is G. H. Hardy's 1940 book-essay, A Mathematician's Apology -- a treatise that gives valued insights into the nature of mathematics, its beauty, and the roles of mathematicians.   But today I want to urge us all to enlarge Hardy's view (shown in the box below) which offers scorn for those who talk ABOUT mathematics instead of creating it.  Our teachers and the others who spread mathematics out into the world ALSO are vital.

Let us use geometry as Edwin Markham does -- and include
in the important world of mathematics those persons who communicate about that world.

Read more »
Posted by JoAnne Growney at 12:13 PM No comments:

The September 2020 issue of Scientific American contains a poem by British Poet Laureate Simon Armitage -- "Bring Back the Leaf"  -- AND an announcement that from now on each monthly issue will contain poetry. Like!
Although this poem is not mathematical, I offer news of it here because the Scientific American's inclusion of the arts with the sciences and mathematics (STEM enlarged to STEAM) is a very important step.

The complete poem, "Bring Back the Leaf" is available here.
At this link is info about a Simon Armitage poem that helps to clean the air . . .

Posted by JoAnne Growney at 11:18 AM No comments:

Through many years of the history of poetry, the sonnet has been a treasured form -- as poets strive carefully to match the iambic pentameter rhythm and some pattern of rhyme, this concentrated thinking leads to careful word choices and memorable poems.  (Here is a link to a mathy sonnet by a math teacher's son, John Updike.)
Modern poetry has many "free verse" poems that follow no particular form AND ALSO a variety of new forms.  One particularly popular format (appearing often in this blog) is to count syllables-per-line using the Fibonacci numbers   Here an interesting example by poet Marian Christie which describes increasing complexities of crocheting using Fibonacci syllable-counts.

Christie's poem was first published in here in Issue 36 of The Fib Review.

Posted by JoAnne Growney at 2:21 PM No comments:

This link leads to to a file of names of poets and math-people and blog-content topics. Or scroll down--for a list of labels/key words.