Out of Nothing -- A Strange New Universe

Shashi Thutupalli is a scientist -- in Bangalore, India -- who enjoys poetry and often explores the connections between poetry and mathematics.   He has shared with me several samples of his work and I offer below the opening page (of three) of Thutupalli's poem, "Out of Nothing I Have Created a Strange New Universe."  (The full poem, together with artwork, is available in Visual Verse -- at this link.)

Also in Visual Verse is Thutupalli's "Dimensional Reduction' -- at this link.
Posted by JoAnne Growney at 2:02 PM 1 comment:

I am exited by last week's news that Oklahoma poet-- and member of the Muskogee Nation -- Joy Harjo has been appointed Poet Laureate of the United States.  Harjo came to poetry via music and she sees in poetry a way of making connections and building understanding.
Struggling through complexity to understanding is a similarity between poetry and mathematics. Beyond that basic connection, however, Harjo's poetry is not closely linked to mathematics.  EXCEPT:  One of her poems (found online at PoetryFoundation.org) follows a strict syllable count.  In a birthday tribute to a friend who has turned seventy, Harjo has produced a seventy-line poem in which the syllable counts proceed as 1, 2, 3, 4, . . . , 69, 70. (In the terminology of OULIPO, Harjo has produced a growth-only snowball.)   Here are the opening lines of Harjo's poem:

from Becoming Seventy     by Joy Harjo

Knoxville, December 27, 2016, for Marilyn Kallet’s 70th birthday.
This poem was constructed to carry any memory you want to hold close.
We
arrived
when the days
grew legs of night.

Bridges Math-Arts Conferences have become an annual summer tradition and this year's conference is July 16-20 in Linz, Austria.  One of the participants in this year's Mathematical Poetry Program is University of British Columbia Professor Susan Gerofsky -- and I offer her "Desert Poem" below.  Gerofsky's poem was constructed using a permutation pattern called PH4 (from bell-ringing) and an explanation follows the poem.

Read more »
Posted by JoAnne Growney at 9:38 AM No comments:

Australian poet Richard Scutter has online collection of his own poems (this link leads to a chronological listing) and of favorite poems (go to this link and scroll down) by himself and others.  Here are samples:

Read more »
Posted by JoAnne Growney at 10:27 AM No comments:

Solve a puzzle -- find a poem!

At Canada's Capilano University, Lisa Lajeunesse teaches in mathematics in the School of STEM -- and is an enthusiastic promoter of links between mathematics and the arts.  At the 2018 Bridges Math-Arts Conference she presented this paper on "Poetry Puzzles"; a sample puzzle is offered below.

Place 2 or 4 or 1 or 3
in each cell that is free.
When you finish each number should show
once in each column and once in each row.
When you've filled in each cell --
all the numbers are there --
you can then read the poem
from your solved square.

Read more »
Posted by JoAnne Growney at 11:20 AM No comments:

Celebrated on June 2 at the Joaquin Miller Poetry Series Washington DC's Rock Creek Nature Center, poetry by winners of the  Jacklyn Potter Young Poets Competition, sponsored by The Word Works, Inc.  One of these winners, Julien Berman, is a student at Georgetown Day School and a prize winning writer and accomplished violinist AND a member of the GDS Math team.
Here is Julien's winning poem:

A stretched canvas tarp
Not ungainly in style, but again not cut in a perfect polygon.
A wooden beam or two
Slung upwards and out, at ninety degrees.

Have fun with "The Pi Song"

Often we celebrate the number pi -- ratio of the circumference of a circle to its diameter, an infinite non-repeating decimal that begins with 3.1415926535 8979323846 2643383279 . . ..  Pi is a bridge between day-to-day mathematics that nearly all of us know and mathematics that is complex and difficult.
My own celebration of Pi includes these earrings -- but I have friends and former colleagues in the Bloomsburg University Department of Mathematics and Digital Sciences that celebrate Pi in a far more entertaining way -- in song.  Here is a link to the YouTube version of "The Pi Song" with lyrics by Bill Calhoun and Kevin Ferland and performed by "Professor Parody (Kevin Ferland).  Performance credits are found here.  And here is a link to some more details about the song. 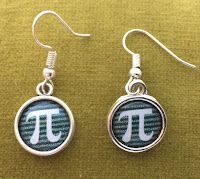 Here is a link to a previous posting with more mathy song lyrics by Bill Calhoun.


Posted by JoAnne Growney at 11:46 AM No comments:

Last Friday -- May 31, 2019 -- was the 200th anniversary of the birth of American poet, Walt Whitman and the website of the Academy of American Poets offers poems by Whitman and background information to enrich our celebration.  Here, from his oft-revised-and-expanded Leaves of Grass (Signet Classics, 1960), is a poem -- "When I heard the learn'd astronomer" -- with mention of mathematics.  (Much of Whitman's work is available online here at Project Gutenberg.)

WHEN I heard the learn'd astronomer
When the proofs, the figures, were ranged before me,
When I was shown the charts and diagrams, to add, divide,
and measure them,

Read more »
Posted by JoAnne Growney at 10:44 AM No comments: