The latest issue of the Journal of Humanistic Mathematics focuses on the theme "Mathematics and Motherhood" -- go here to explore the Table of Contents.  In that issue is my poem "Wondering" - found here.


Thank you, Mark Huber and Gizem Karaali,
for your editorship of this fine publication.

Posted by JoAnne Growney at 9:38 AM No comments:

Yesterday in my Honda, in heavy traffic -- driving to my present home in Silver Spring, MD from a high school reunion weekend in Indiana, PA -- my thoughts began to shape a poem.  Here, with thanks to Kathy Rend Armstrong and a host of other classmates who helped get a bunch of us together for a 60th reunion of the Indiana Joint High School Class of 1958.  Here is my brief poem. 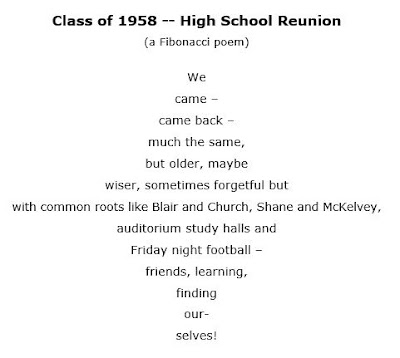 For readers unfamiliar with the Fibonacci numbers, here is a link to an explanation, and this link leads to other postings of Fibonacci poems in this blog.
Posted by JoAnne Growney at 11:16 AM No comments:

Australian poet Geoffrey Lehmann is also a writer of children's books and a tax lawyer.  This mathy poem comes from his collection, Spring Forest (Faber & Faber, 1994); I found it in the anthology A Quark for Mister Mark:  101 Poems about Science (editors--Maurice Riordan, Jon Turney; Faber & Faber, 2000) -- a collection introduced to me by Australian poet, Erica Jolly.

Not Yet Found     by Geoffrey Lehmann

I chose the name Spring Forest
and I've yet to find the spring.

Some unfinished equations
are the closest I've come
to the puzzle of why I'm here.

Read more »
Posted by JoAnne Growney at 10:36 AM No comments:

The 2018 Brides Math-Arts Conference in Stockholm will take place this week -- July 25-29, 2018.  Mathematician Sarah Glaz has been a leader in stimulating the poetry portion of this conference -- including organization of a reading to be held on Saturday, July 28 and a Poetry Anthology, of which a portion of the cover is shown below.


Here, from the anthology, is a sample of its finery -- a poem by mathematician, poet, and editor, Sarah Glaz:

Read more »
Posted by JoAnne Growney at 6:46 PM No comments:

Counting insects, counting on them . . .

Recently I had the opportunity to vacation in southern Portugal with my older daughter and her family and there -- with clear, bright-blue skies and cooled-down night-time temperatures -- not only did we vacationers thrive but so do many insects.  Their busy behavior reminded me of their presence on the childhood farm in Pennsylvania on which I grew up and their important role as partners in the agricultural process -- pollinating and irrigating and . . .
And so -- jet lagged yet continuing in my appreciation of the population-mathematics of insects -- I offer below a poem of bees by Emily Dickinson (1830-1886), also found here.  Another bee-poem by Dickinson posted back in August 2013 is available at this link.

The most important population   (1746)   by Emily Dickinson

The most important population
Unnoticed dwell,
They have a heaven each instant
Not any hell.

Their names, unless you know them,
'Twere useless tell.
Of bumble-bees and other nations
The grass is full.

An interesting Smithsonian article, "Bees May Understand Zero . . ." may be found here and the Washington POST has featured bees at this  recent link and this earlier one.


Posted by JoAnne Growney at 2:30 PM No comments:

Today's posting is a villanelle about running -- and it is was written as a response to Theodore Roethke's villanelle, "The Waking" -- posted a few days ago on July 3.  Moving quickly has been a part of my mental life (as I dart from rhymes to equations, looking for connections) and my physical life (as I try to burn enough energy that I may sit thoughtfully for a while).  Runners are among those I admire; my heroes include  Flo-Jo -- Florence Delores Griffith-Joyner (1959-98), whose 1988 records still stand, making her "the fastest woman in the world" -- and Sir Roger Gilbert Bannister (1929-2018) -- whom I remember from a lunchtime news broadcast in 1954 when I was a girl on a farm in Pennsylvania and he ran the first sub-4 minute mile in Oxford, England.
A villanelle has a rather complex structure -- stated somewhat simply, it is a nineteen-line poem with two rhymes in its five stanzas and two lines that each are repeated (precisely or approximately) four times.  These repetitions can lead to an interesting back-and-forth in the development of images and ideas. Although not about mathematics, this villanelle may, it seems to me, say a bit about mathematicians.

Response (by JoAnne Growney) to “The Waking” by Theodore Roethke

My sleep is brief.  I rise to run again,
to flee the doubts that catch me when I'm still.
I live by going faster than I can.

Read more »
Posted by JoAnne Growney at 10:01 AM No comments:

What does MEAN mean?

Posted by JoAnne Growney at 1:40 PM No comments:

A proof in limericks

The word "transcendental" is an adjective that refers to an abstract or supernatural noun.  In mathematics, the term's meaning is specified more precisely -- a transcendental number is one that cannot be a root of any algebraic equation with rational numbers as coefficients. The number π (ratio of the length of the circumference of a circle to its diameter) and the number e (base for the system of natural logarithms) are the best known examples of transcendental numbers.
Retired Arkansas law professor (and former math teacher) Robert Laurence has fun with this pair of transcendentals using limerick stanzas.  Get out your pencil and graph paper -- and enjoy puzzling through his rhymes.

A Transcendental Proof in Six Stanzas
by Robert Laurence   © 2018
They are transcendent you see:
eπ and πe.
The prize you’ll win when,
With pencil or pen,
You prove which is smaller to me.

Read more »
Posted by JoAnne Growney at 2:06 PM No comments:

Waking -- to mathematics, to poetry

Bridges-Math-Arts-Conferences --   Places to make connections!
Yesterday I posted a bit of information about POETRY at the 2018 Bridges Conference.
At the 2017 conference in Waterloo, Canada -- via a dramatic presentation -- I met Peter Taylor
and some of his math-poetry ideas are featured below.


One of my high school literature texts included "My Papa's Waltz" by Theodore Roethke (1908-1963) and I remember it particularly because its author was alive and its subject matter relevant to the experiences of those of us in rural Pennsylvania who were assigned to read it.  Not all of Roethke's poems are favorites -- one that I have wrestled with is "The Waking" -- which I recently found in a lecture entitled "Mathematics and Poetry," -- prepared and delivered by Professor Peter Taylor of Queens University (and available here).  In that lecture, Taylor's remarks range widely.  For example, he considers the equation
24 = 42
and suggests it as a poem.
Both mathematics and poetry challenge us with difficult ideas -- and Taylor wonders if we might see more similarity between the two if we did not place higher economic value on mathematics.
Roethke's poem, "The Waking," is a villanelle -- a poem of 19 lines with two lines repeated four times, each time in a new context -- and this structure helps create the vivid feeling of waking to new knowing.  Taylor challenges us:  as teachers, as students -- of mathematics, of poetry -- we need to be WAKING.  Roethke's poem explores the complexity of that process.

During each summer since 1998, mathematicians and visual artists, poets and musicians, have gotten together at a BRIDGES conference to celebrate the overlapping connections of their arts.  This years conference, BRIDGES 2018, will be held July 25-59 in Stockholm.  As she has done in several previous years, mathematician-poet Sarah Glaz has organized a poetry reading as part of that event; this link leads to information about the participating poets.  Available for purchase, a poetry anthology with work from past and present Bridges poets.  The small poem offered below is one that is featured in the anthology.

is good numbers—
the length of a furrow,
the count of years,
the depth of a broken heart,
the cost of camouflage,
the volume of tears.

"Good Fortune" also is found in my collection, Red Has No Reason (Plain View Press, 2010).