For mathematicians, reading a well-crafted proof that turns toward its conclusion with elegance and perhaps surprise -- this mirrors an encounter with poetry.  But can one have that poetry-math experience without being fluent in the language of mathematics?  Below I offer a proof (a version of Euclid's proof of the infinitude of primes) and a "cut-up" produced from that proof-- and I invite readers (both mathematical and non-mathematical) to consider them as poems. 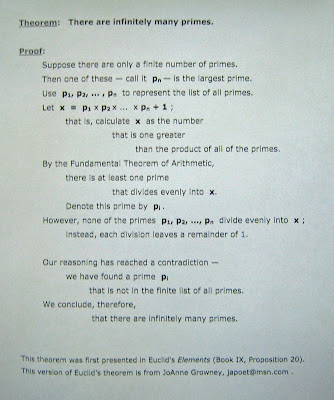 From the proof above I created another "poem" -- this time a cut-up.     One may find at UbuWeb an article by writer William S Burroughs about the Cut-Up Method of Brion Gysin.  Burroughs writes that in the summer of 1959 painter and writer Brion Gysin cut newspaper articles into sections and rearranged the sections randomly.  Soon there was  Minutes to Go -- with cut-ups by Gysin, Burroughs, Sinclair Beiles and Gregory Corso, (Two Cities Editions, 1960) -- and described by Burroughs as containing "unedited unchanged cut-ups emerging as quite coherent and meaningfu.l" (Gysin's cut-up method is similar to collage, used by painters and other visual artists.)
I applied Gysin's process to my version of Euclid's proof.  I cut a print-out of the theorem-proof into many several-word strips and then selected and pasted some of the strips onto a piece of red paper -- my process was quick and somewhat haphazard, but I preferred word-phrases to strings of symbols.  Here is the result: 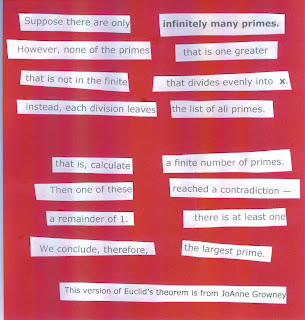 Readers are encouraged to contribute comments to this blog posting.  And  to create cut-ups of their own.
Posted by JoAnne Growney at 9:22 AM