GEOMETRY IN POETRY
Warning:  even if you are not a mathy person, you will like the poem offered below!
When a writer picks up her pen and starts to write, the initial phrases may be simply a ramble -- a pouring out of thoughts that might be able to be shaped into a poem.  Over the centuries, writers have used syllable-counts and patterns of rhyme to help them shape their word into the best-possible expressions.
Earlier in this blog (in this 2016 posting) is a poem created by Black Hills State University mathematician Daniel May using a geometric structure called a Fano Plane.  I offer below another similarly-structured creation by May -- and, after the poem, a bit of explanation.

it's late in the day and we’ve climbed up this rise.
i stare, too closely, into the
leaving of the light streaming through the treetops
from the next ridge over.

later, i'll wonder if looking into the sun makes me crazy,
or gives me secret terrible knowledge.
my last willful act will be staring directly into our star,
and it will be like burial at sun.

ancient people must have felt the same way,
uncertain about the changing into fall, and the leaving.
i wonder what anxiety meant to them.

but for now she is with me and she is two and
the light seasons her hair like aspen leaves.
she shivers, and i tell her we'll stay just long enough for the sunset.

and she smiles, eyes closed, and whispers closely
"Daddy - I - Am - The - Sun"
and immediately i'm anxious.
we must not stay on that hilltop
until sundown.

later, i'll imagine an anxious medicine woman dying on that slope,
at that time of day in that time of season,
in a stare-down with her last light.

all of which must have been the meaning of my three seasons of fear.
but for now i'm holding her wonder close to me as we descend
and i am certain i am no longer whatever i used to be.

May's poem first appeared here in TalkingWriting, an online journal that often features poems with links to mathematics, and is presented here with the author's permission.  Appearing with the poem we find this labeled Fano plane: 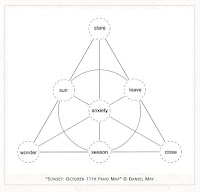 May offers this note about the poem and its relationship to the Fano Diagram:
There are seven repeating words throughout the seven stanzas of the poem. Each stanza contains three of the words, and each word appears a total of three times throughout the poem. Any two of the words appear together in exactly one stanza, and any two stanzas share exactly one of the words between them. The above diagram of the Fano plane depicts the word format. The Fano plane has seven "lines," represented here by the three sides of the triangle, the three diagonals, and the circle. Each line of the Fano plane contains words appearing in one of the poem’s seven stanzas. For example, the circumference of the circle contains “sun,” “leave,” and “season,” and these words appear together in the fourth stanza. For more information, read my 2015 paper coauthored with Courtney Huse Wika, "Galaxies Containing Infinite Worlds: Poetry from Finite Projective Planes,"
Posted by JoAnne Growney at 10:49 AM

This link leads to to a file of names of poets and math-people and blog-content topics. Or scroll down--for a list of labels/key words.