Enjoy the Possibilities in a Multiple-Choice Poem

Just as a test-taker mulls over which answer is correct, a poet mulls over word choices and what should come next.  South Dakota mathematician-poet Daniel May (professor at Black Hills State University) has broadly captured these decision choices in a poetry-form called a Digraph Poem or a Multiple Choice Poem.  I first learned of this idea several years ago at a Bridges Math-Art Conference at Waterloo, Canada when May and a colleague, Courtney Huse Wika, presented a paper entitled "The Poetics of a Cyclic Directed Graph" (available online here in the Bridges Archives).   In this paper is a poetry-creation by Huse Wika that involves various choices and orders of stanzas.

This mixing of stanzas came to my attention again via a paper by May entitled "In the beginning all is null" which appeared in Journal of Mathematics and the Arts, Volume 14, Issue 1-2 (2020) as one of a group of "artist's statements."  In this latter paper, May thoughtfully describes his process of composing his poem --  he composed eight eight-line stanzas -- and the reader was to read a stanza, choose and read another stanza, and so on with a third.  In all, eight poems -- each sharing stanzas with others.

Recently a new online multidisciplinary journal, Poetrishy, has been born -- and it's first issue features another Multiple-Choice/Digraph poem by Dan May entitled "What the Body Does Next" --and available here.   Although you will need to follow the link I've offered to actually read the poem, I offer below a small screen-shot  -- so that you can get a sense of its structure. 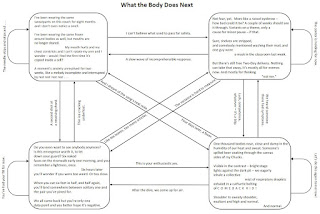