In 1998 at Southwestern College in Winfield, KS an Iranian mathematician, Reza Sarhangi, organized the first of a series of annual Bridges conferences that celebrate the intersection of mathematics and the arts.  On July 1, 2016, this vital mathematician-artist passed away.  Many will celebrate the life of this warm and generous and talented man.

On July 1, 2016 noted French poet Yves Bonnefoy (b.1923)  also died.  This coincidence led me to look through the work of Bonnefoy to find a poem that could be a tribute to Sarhangi.  Here is Bonnefoy's "A Voice" -- I imagine that Reza Sarhangi might have spoken these words as he worked in the intersection of mathematics and art.

A VOICE     by Yves Bonnefoy

I tended a fire in the simplest night,
My words were pure, by now, because of the fire,
I kept watch, a bright Fate, less troubled daughter
Of a dark-minded Fate, this shadow on the walls.

I had a little time to understand and to be,
I was the shade, I loved keeping to the house,
And I waited, I was the patience of the rooms,
I knew that the fire was not burning in vain . . .

This poem was translated from the French by Galway Kinnell  and Richard Pevear (below I offer the original French version) and is on my shelf in the collection, Early Poems: 1847-1959 (Ohio Univ. Press, 1978).)  Bonnefoy, like Reza Sarhangi, was an interdisciplinary creature (even a bit of math in his poems) – see my 2012 posting of his work here. 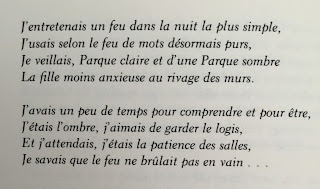 Emily Grosholz, from whom several math-related poems also have appeared in this blog (easily found with a search using "Grosholz") also is a translator of Bonnefoy; learn more about these translations here.
Posted by JoAnne Growney at 1:20 PM